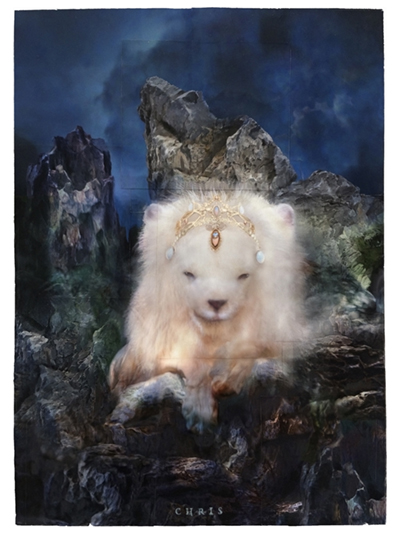 
Atu, the barking white lion, lives in the backyard of a man with three daughters. He has remained unseen successfully for many a generation. Knowing his humans are afraid of dogs, he has taught himself to bark whenever one of them would come too close, and scare them off. One day, Atu hears the man tell his daughters he must leave on a journey and asking each of his daughters what they would like him to bring back. The oldest wants diamonds, the second pearls, and the youngest a singing, springing lark.

This makes Atu fall madly in love with the youngest daughter.The man, however, has not a clue what in God’s green earth a lark is, but is afraid to tell his daughters that and risk being even more of a laughing stock than he already is. Without saying another word, the man leaves and Atu forgets about this event for a while. One day, the man returns with diamonds and pearls, but no lark, which makes Atu feel sad and sorry for the youngest daughter and love her even more. One night, as Atu enjoys being the king of his own kingdom, -the far back of the backyard of the man with his three daughters- he sees the man wandering about the garden, getting awfully close, mumbling “lark, lark what in heaven’s name is a lark”.

Atu starts his barking, but instead if running, the man is starteled, and looks Atu straight in the eyes and utters: Lion.. Bark.. Lark? LARK!, runs into the house and orders his servant to catch it. Instead of taking offence to this thread, threatening to kill them both for calling him a lark, the lion decides to pardon the man’s ignorance and look upon the event as a sign of fate. He lets himself get caught and led to the youngest daughter. She, too, instantly decides to spare her father from yet another humiliation and graciously accept her ‘lark’. In the end Atu moves into the house and the servant is given the task to build a large ornamental bird cage in the back of the backyard, go to the colonial flee market and buy a couple of ‘Leeuwerikken’ from a Dutch merchant.

ATU is passionate. He knows what he wants and he gets creative in finding ways to get it. He is considerate of other people’s feelings and is willing to slightly adjust his course in order to spare the feelings of others.