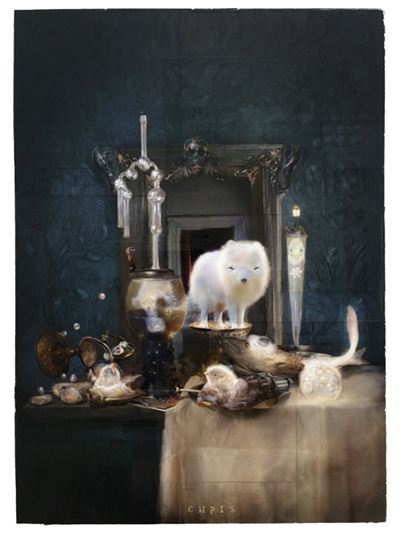 
Caren is a psychopomp. It is her responsibility to escort newly deceased souls from the dinnertable to the afterlife. Her role is not to judge the deceased, but simply to gently guide them.

Also, Caren is a mediator between the unconscious and conscious realms. A coin to pay Caren for passage is sometimes placed in the mouth or on the eyes of a departed animal. Some say that those who can not pay the fee, have to wander between the dining room and the kitchen for one hundred years, until they are finally allowed to cross. And although Caren appreciates a good shiny silver coin, she’s not that demanding. She doesn’t want their money. They’ll need that themselves to pay the ferryman. She happens to like fish, or shepherd’s pie or a good stew and is especially fond of nice juicy fowl. And let’s face it, they will not be needing that particular part of their entity anyway. So really everybody wins.

So at the end of the day, more than anything else, Caren is a helpful animal and she makes the best of an otherwise unfortunate situation.

CAREN has the ability to rise above any situation. She knows her own strength and she is aware of her flaws. She is willing to work on the flaws she can change and prepared to accept the ones she can’t. She is sympathetic towards her surroundings, and realistic enough not to dwell and linger in pity or self-loathing.