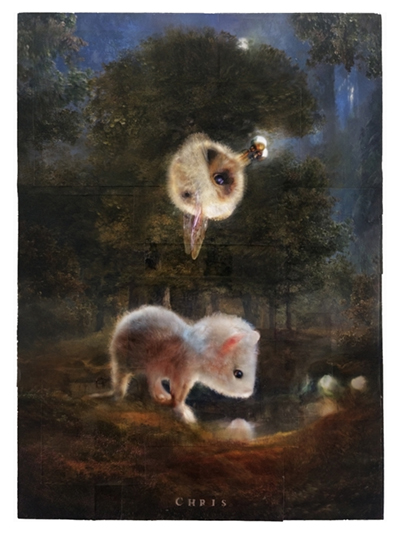 
This is the story of Echo and Cis. Once upon a time, a nymph and a river fell madly in love and after one year of love the nymph gave birth to the child they called Cis. As much as Cis was a result of their love, nymphs and rivers aren’t known for their superior parenting skills, so Cis wandered the great earth alone. One day Cis was walking in the woods when Echo, an air nymph saw him, fell deeply in love, and followed him. Cis sensed he was being followed and shouted "Who's there?". Echo repeated "Who's there?" She eventually revealed her identity and attempted to hug him.

Cis backed away and told Echo to go and find love elsewhere, as he felt he was to blame for his parents leaving him. Echo came closer and gently ushered Cis toward a brook, where Cis leaned over the water and saw himself, radiant and in the bloom of youth. Both Cis and Echo stared at Cis’ brearthtaking reflection for what seemed like hours. Their gaze met in the depth of the brook, they smiled, which soon broke out in uncontrollable laughter. Right then and there they decided they had all they would ever need. They vowed to stay together always, to make this place their home and garden and that is where they will remain.

CIS AND ECHO see your beauty. It shines from within you, it defines your appearance, and it even rubs off on your surroundings. There is a person out there who sees you, in all your glory and your grace. You will find each other. You may be closer than you think.