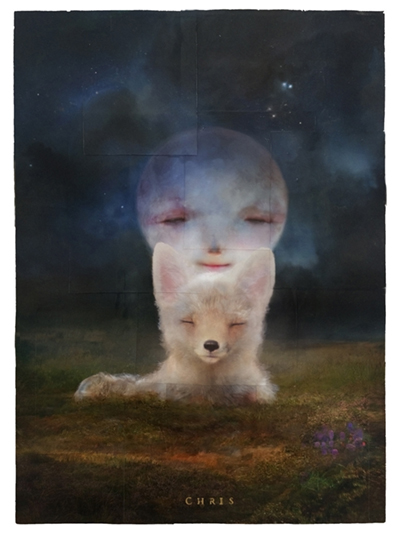 
There once was a fox named Ginger who wanted to go to the moon more than anything in this world. He tried persuading his friends to come with him. No, they said, the moon is so far, too far. No it’s not, the fox replied. It’s right there.

The fox looked at the moon all night and dreamt about it all day. His friends just rolled their eyes and laughed behind his back as well as in his face. The fox didn’t care. He didn’t even hear them. He didn’t even see them. All he saw was the moon. All he heard was the moon. His friends expected him to either come to his senses soon and return into their midst, tail between his legs, or somehow make his way to the moon, never to be seen or heard of. But the fox stayed put, in the middle of an open field, eyes closed, eyes fixed at the moon, all the while his smile growing broader each night every day.

After a while, his friends decided it had gone on too long and walked toward him. So, they said, are you done? Do you give up? Give up? The fox replied, ever smiling. I’m there. It’s here. Look up. Can’t you see it smiling at me? And they did. And they could.

GINGER has goals. She decides where she wants to go and she will not rest until she succeeds. She knows that both success and failure are in the eye of the beholder. And to measure your own success through the eyes of anyone but yourself, is just silly.