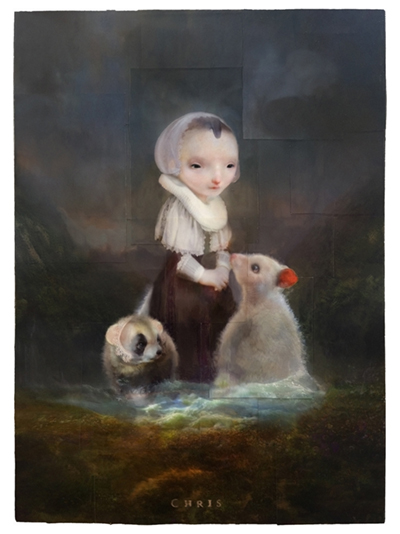 
A rich lady named Hanske lived in a house with golden floors and silver walls. She possessed more ships than all the merchants in town combined and she got more and more rich by the day.

She summoned her best sailing master and she demanded him to bring her a ship full of grain, at that time the most valuable thing on earth.

“Do you not have enough already? You have silver and gold, why demand goods so perishable? Is it status you seek? Is it decadence?”, but the sailor abode her wish nonetheless.

After a long quest the sailing master returned with a boatload full of grain. The woman asked “on which side of your ship did you load the grain? “Starboard” replied the boatsman. “Then toss it over at the portside.”

Then began a period of intense heat and drought, the water slowly started to withdraw and was reduced to a large pond and the hills all around caught fire. The woman stood in the water while all the woodland creatures came running from the hills and gathered around her in the cool, fresh water. Where the grain was tossed overboard, a vast field of golden grain grew and there was enough food for all of the townspeople for the years to come.

HANSKE is compassionate and thinks ahead. Despite her own good fortune, she will not become blind for the frailty of balance and the vulnerability of life. She keeps sight of the larger picture and will always invest in the future even if that does not yield her any personal gain.