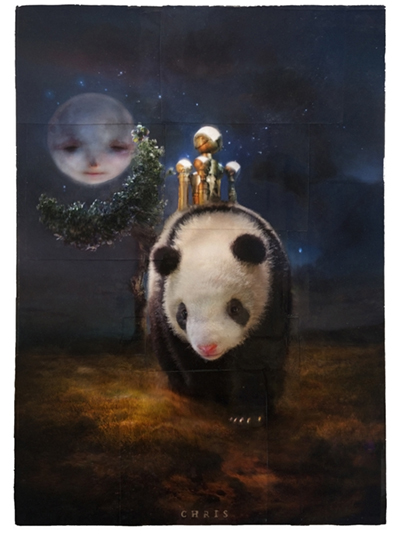 
Hevelius has built an observatory, widely known by the name Sterrenburcht (Star Castle), on his back, equipping it with splendid instruments, ultimately including a device with wood, glass and wire tubes he constructed himself. This to the curiosity and presumptuous concern of his fellow moon bears (or moonies) as all others had been using state-of-the-art tubeless aerial telescopes.

The other moonies tried to persuade Hevelius to use telescopes for his measurements, yet Hevelius was keen on demonstrating that he could do well with his apparatus. He is thus considered the last astronomer to do major work without the use of a telescope, but, as far as anyone knows, the first one to have come to learn so much about the moon. For example, her name is Annie, short for Anaxagoras. She has no dark side. No man ever really set foot on her. There are no moon phases, those are her siblings, and she is the only one who can talk to werewolves.

HEVELIUS walks his own path. He doesn’t let anyone tell him what he should do or how he should behave. He knows that the general conception of today is tomorrow’s object of ridicule.