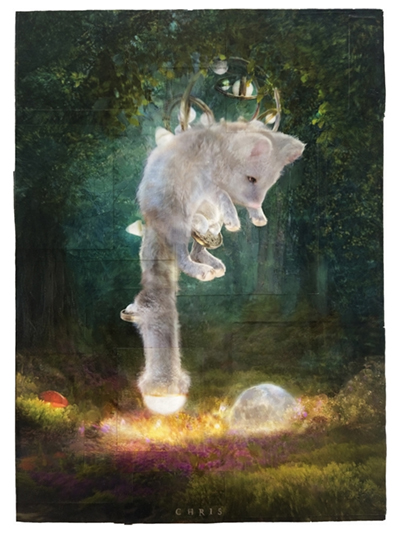 
Kit is a fox. He comes at night, sneaks into your bedroom and sleeps with you. Always. Every night. To protect you. He loves it, but to be frank, he’s a little fed up with all the misconceptions, crying kids, screaming moms and dads throwing slippers at him. So, he is here to explain some things.

“Goodmorning children”. In classical Japanese, kitsu-ne means 'come and sleep', and ki-tsune means 'always comes'. Its origin lies in the oldest surviving kitsune tales, and unlike most of those in which a kitsune takes the form of a human woman, marries men and destroys their lives in the process, this one does not end tragically. So pay attention.

A man spent the seasons longing for his ideal of female beauty. He met her one evening on a vast moor and immediately married her. Simultaneously with the birth of their son, the man's dog was delivered of a pup which, as it grew up, became more and more hostile to the lady of the moors. She begged her husband to get rid of it, but he refused. At last, one day the dog attacked her so furiously that she resumed vulpine shape, leaped over a fence and fled. "You may be a fox," the man called after her, "but you are the mother of my son and I will always love you. Come back when you please; you will always be welcome." So every evening she snuck back and slept in his arms.

You see, it’s very different. I know, there’s the shapeshifting, the marrying a man, the running off, but the fox returns to her husband each night as a woman. And then leaves each morning as a fox but you see my point.

Another cool thing worth mentioning I think is Kitsune possess superior intelligence, long life, and magical powers. The word kitsune is sometimes translated as 'fox spirit'. This does not mean that kitsune are ghosts, nor that they are fundamentally different from regular foxes. Because the word spirit is used to reflect a state of knowledge or enlightenment, all long-lived foxes are to gain supernatural abilities. There are two common classifications of kitsune:

The zenko are benevolent, celestial foxes associated with the devine. The yako tend to be mischievous or even malicious. Oh, right, and there’s the ninko, an invisible fox spirit that you can only see when it possesses you. But no one really likes to talk about those.”

KIT is proud to be who he is and where he comes from. He feels one should know all the facts and hear the entire story before one passes judgement. He encourages you to learn about your background and take pride in your ancestry.