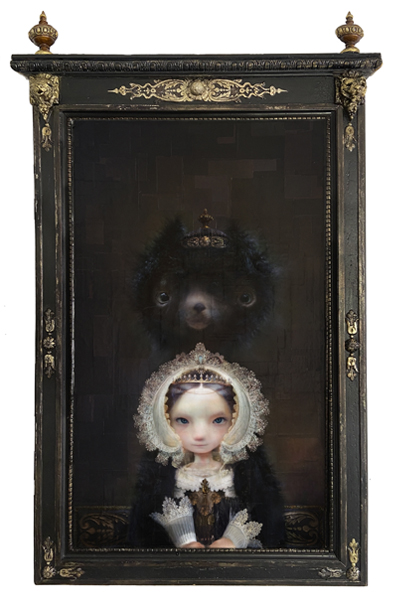 
Lob, or Lob-Lie-By-the Fire, also referred to as The Hairy One. Lob is a very content and fulfilled creature. He’s gigantic, and very, very hairy. He really likes the way he looks and the fact that he is, if not for his fur, naked, doesn’t bother him in the least.

Lob doesn’t need much. He happily helps you out with any household chores you may have in exchange for leftover food, a saucer of milk and a place in front of the fire. Lob is very strong and doesn’t get cold. He will run any errand you have for him. Whether it’s herding sheep on a snowy night, logging rocks, reaping or sowing, mowing the lawn, repairing fishing nets or even a boat, Lob will do so with a smile on his hairy face.

He loves to be in your company, silently. You can invite him to snuggle up against you, or you can offer him your last cookie, (which he will share with you all the same). Just do not ever offer him clothes. He will not thank you for that. Gabrielle did her research. She found that many an old manuscript speak of Lob, although his name may vary, it is most certainly him. And on more than one occasion, Gabrielle read the specific warning not to present him with clothing. In 1512, in the wine cellar of an abbey in Northern England, Lob was offered a monk’s habit and Lob allegedly cried out:

Supposedly, Lob subsequently departed in a "melancholy wail", the manuscript furthermore declares that his “voice could thenceforth be heard in the whistling winds of the mountains, mourning the loss of his friar friend.”

LOB AND GABRIELLE are one. They have been apart for most their lives. They haven’t known about one another for most of their days. But when the day finally came, where they met, they just clicked.

They are both what people call ‘silent waters’. They spend their happiest days in solitude, reading by the fire. They have been alone for most of their lives. They enjoys being alone. And they enjoy it best when they’re together.