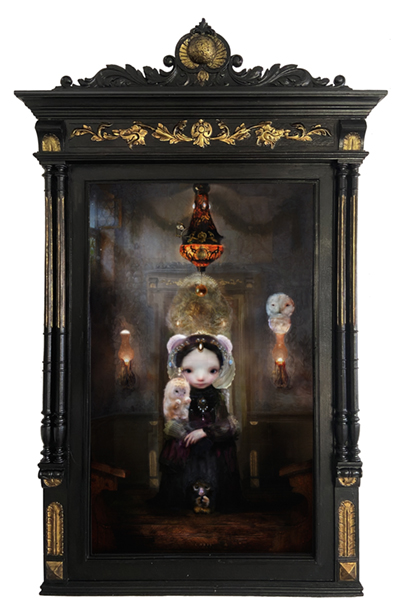 
Millie is a legend. Everything about her is legend. She is known never to shake hands. Instead, she looks a person in the eye and states:

“Mielikki, master of forests and the hunt, wife of a forest spirit, mother of Nyyrikki and Tuulikki.” When in a good mood, she is known to add “said to have played a central role in the creation of the bear.

No one has seen her at work. She disappears for days, sometimes months on end and just when gossip about her whereabouts starts to tip sideways, she’ll suddenly stand in the door of a bar, silencing the crowd, leaving them strung with anticipation.

When asked where she’s been, one of the stories she’ll tell is that a local hero offered her prayers, gold and silver so he could catch the ‘fabled elk’. Once, she claimed to have been asked to protect cattle grazing in the forest of a far-off country it is thought very important to stay on her good side. Rumor has it she is also offered prayers by those who gather mushrooms and berries, but she doesn’t like to talk about it and will not thank you for asking about it.

As mythical as her own stories might be, Mielikki IS known as a skillful healer of paws of animals who have escaped traps, helps chicks that have fallen from their nests and treats the wounds of other helpless creatures. She knows the healing power of herbs and will even help humans if they know well enough to ask her for it.

So, she started making up stories. Adventures. And when she’d have a couple of days of, she couldn’t wait to tell the people she knows about her adventures. And so she did. And they loved it. And they believed it. And why shouldn’t they? Her adventures are very real. And very much hers. And her alone. And she wants to share them. They’re just too good to remain untold. To remain untrue.