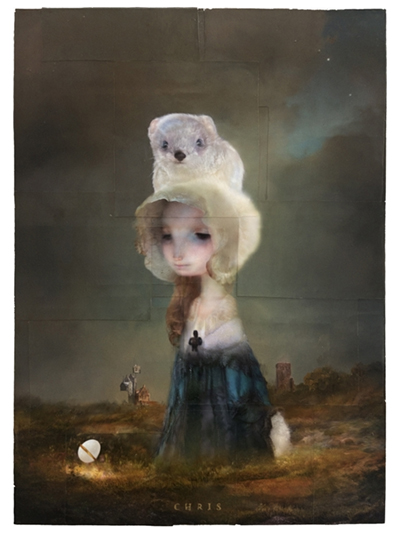 
One autumn day, the Dutch villager Ripley wanders from her village into an open field with her black mink Wolf to escape her husband's nagging. She hears her name called out and sees an egg lying in the field, making thunderous noises. She decides to open up the egg and discovers the source the noise: a group of ornately dressed and bearded men who are playing nine-pins.

She asks who they are and learns that the men are the ghosts of the crew of the Halve Maen. She joins the men in their game and drinks some of their liquor and falls fast asleep. When she wakes up next to the egg that now produces a soft humming, she notices she is wearing antiquated Dutch clothing and Wolf has turned silvery white. She picks up the egg and starts to walk back to the village. Getting closer, she notices it has been reduced to a handful of wooden structures around a brick tower. Once she has reached the village, a couple of barefoot children runs up to her and ask her who she is.

She looks at Wolf and states: I am Chronos, I was engendered by earth and water, this is my companion Chaos, and this, is an egg. The egg started to roar, and Ripley howled: “hush, for the egg will produce the hermaphroditic god Phanes who will give birth to the first generation of gods and will the ultimate creator of the cosmos.” The children laughed, Ripley smiled, and she taught them how to play nine-pins.

RIPLEY does not take life too seriously. Or herself, for that matter. She will just as soon put her belief system overboard, when new light is shed on life or a particular situation. If she is to receive new insights, she is not afraid to change her ways, her game or her name.