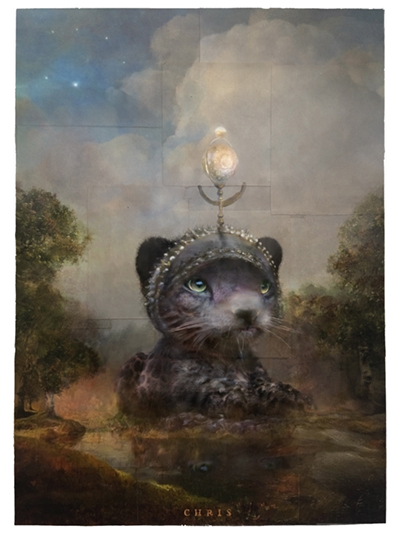 
Rudyard, Kip or Rudy to his friends, even though his would insist on calling him Joseph. Rudyard is a night panther (melanistic Indian leopard) who serves as friend, protector and mentor to what he lovingly refers to as his “human-cubs”.

He has been offered knighthood several times but has graciously declined. Here he is seen, mere moments before receiving a versatile and luminous narrative gift.

He sits his man-cubs down, scattered around him and begins his story; “Born in captivity in the menagerie of the Raja, I patiently begins to plan for my freedom.

Once I was mature and strong enough, I broke the lock on my cage and escaped into the jungle, where my ferocity and cunning nature won me the respect of all its other inhabitants, except for that no good of a tiger. None but you, my dear cubs, ever learned that I once wore a collar and chain,” explaining Rudyard’s special insight concerning man-cubs. Because he had learned the ways of men, he is also more loving to the abandoned human children who came to be under his care and protection.

RUDYARD is your friend, mentor and protector. He knows what you have been through and looks after you. Having gone through the same stuff you have, he is especially observant of signs of loneliness, and old sorrow.