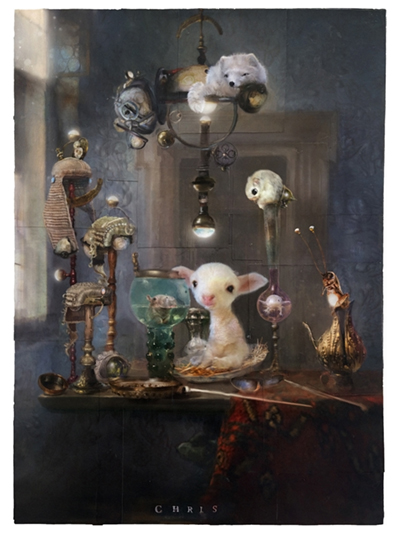 
One day a wolf snatched a lamb from a herd of sheep and ran to his house into his dining room. He was just about to eat the lamb, when the lamb said: “By all means, sir Wolf, please do eat me. But see, the thing is, I just ate a lot of grass. I’ll taste like grass. You don’t even like grass, do you?” The wolf did in fact not like grass one bit, but he decided he liked lamb more than he disliked grass. “Fair enough,” said the lamb. “I just have one request. I have heard your singing voice is sweet like potato pie and soft as a chicken’s thigh. Could you sing me a tune, please? I love to be eaten after a good song.” The wolf was so flattered, having only sang in the shower before.

Even though he thought she sounded quite nice, he never had the nerve to sing in public and didn’t think anyone ever had heard him. So, after a moment of silence, the wolf closed his eyes, and started to sing. It wasn’t so good, but the lamb kept smiling. After the last trembling note had left the wolf’s throat, the lamb clapped her hoofs together and said it was the most beautiful song she’d ever heard. “It made me want to dance.”, the lamb said. “You know, if you sing another song, I can sign along and dance to our tune. By dancing, the grass in my tummy will be digested much faster, and I will taste so much better”.

The wolf thought this was a marvelous idea. He cleared his throat, the lamb started to tap his hoof and they burst into a savage singing and the lamb hippity-hopped all around the dinner table. They sounded so terrible, several animals came up to the house to see what was wrong with the wolf. After the wolf and the lamb had stopped, the wolf smacked his lips, but the lamb said: “That was so lovely. I think we sounded just divine. Look, we even have an audience.” The lamb turned to the visitors and said: “I just happen to know that Pyewacket here is a virtuoso at the singing glass and Mrs. Cricket plays a mean violin.”
The wolf was so excited, he started to wag his tale, , howled in excitement, grabbed a smoking pipe from the table and started to conduct the merry bunch. And ferociously they sang. And fiery they played and frenzied they danced. Feeling confident for the first time in his singing career, the wolf opened the window and sang. Oh, how passionate the wolf sang, uncontrollable, untamed and utterly euphoric. The lamb danced his finest terpsichore and jigged, jived and boogied right out of the window. The wolf kept singing, smiling and waving at the lamb and he howled: “You’ve been a lovely audience! Come and see us again!”

And sir Wolf, Pyewicket and Mrs. Cricket played and sang and danced until the next morning. As the sun rose and the early birds were their first crowd of the day, they decided to never ever stop and roam the lands, travel from village to village and hit the clubs as “the Angelic Sir Wolf, his Wicked Mrs. Cricket and the Enchanted Singing Glass.”

CLARICE is smart, she keeps her head cool and her spirit lifted. She evaluates a situation and is able to anticipate. She makes a plan to get herself out of trouble, and adjusts her plan as the situation unfolds.