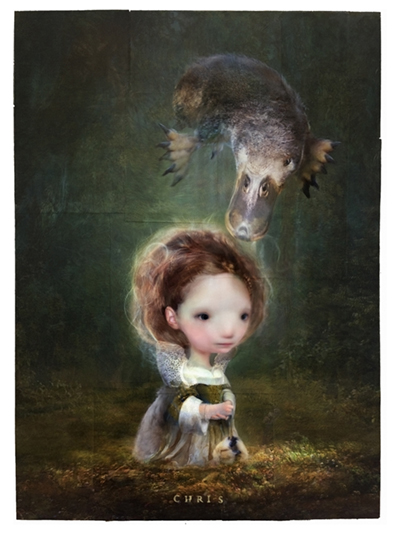 
Dixie is fascinated by speculative fiction, elaborate visions of plausible future, alternate and extraterrestrial ecosystems, that sort of thing. Dixie is influenced by the Contemporary Conservationist Crusade of Concerned Children, especially fueled by their begging requests to save the tigers, dolphins, bees, sharks, whales and the planet. Dixie began to ponder that should the tiger, the dolphin, the bee, the shark and the whale go extinct, something would inevitably take their place. She decided to sit down, fold her hands, put up her thousand-yard stare and make up a perfect future-proof descendant of modern day animals, exploring various natural processes, most prominently evolution and natural selection.

He would be an egg-laying, duck-billed, beaver-tailed, otter-footed mammal. The duckbill must be rubbery and flexible. And he has teeth. Or one superstrong pad, instead of teeth. He would be a mammal, so the babies can safely drink from their mother’s breast. And he would lay eggs so he can protect and hide his babies in a hole that he dug. He’s great at digging holes and corridors. And the eggs would be super small. And blue, so no other animal would think it eatable, should he ever have to leave his egg babies to find food or go for a swim. And it senses prey and enemies through electrolocation.

It has a venomous spur on the hind foot. And extra bones in the shoulder for more strength for digging and more weight for swimming underwater. And a much stronger jaw. And he is an excellent swimmer. And when on land, it engages in knuckle-walking on its front feet, to protect the webbing between the toes. And it glows a bluish-green color in the dark. And he is like the ultimate creature and my best friend. And his name is Douglas.

DIXIE is a creative mind. She is sensitive to warnings and imminent danger, but will not be paralyzed by them. Instead, she puts her creative mind to work in a solution-oriented way. She wants to make a better future by learning from the past, but however grand and noble her causes, she will always keep it personal.