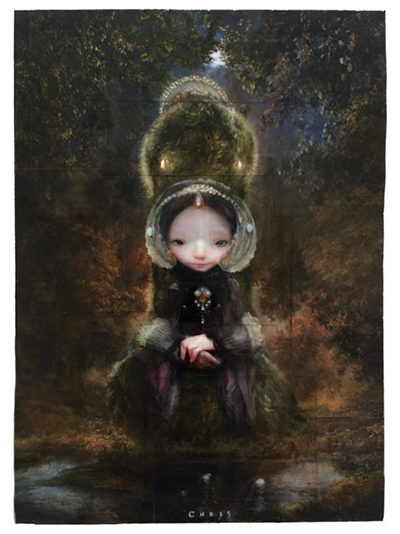 
Sequoia is a Squeao-ta-mos from the Wabanaki tribe. Should that make not a whole lot of sense to you, Wabanaki means people of the dawn and Squeao-ta-mo means swamp lady.

A Swamp Lady is said to be a female ghost that lives in the swamps and makes mournful cries. Anyone who tries to follow the sound of her crying will be lost in the swamp and killed. She is primarily a bogeyman to scare children away from straying into the swamp. By some tellings, Swamp Lady is a malevolent creature, intentionally luring children to their deaths out of spite or so that she could eat them. According to other people, Swamp Lady is a more tragic figure: the ghost of a childless woman who calls children to her out of genuine loneliness, only to have them die when her ghostly hands touch them.

Either way, it’s not like any of that. Meet Sequoia and Tamos. Where Sequoia goes, Tamos is bound to be few steps behind. They’re a comical duo: Lady and Swampie. They do a bit. An act. Where they stumble across the swamps, and the only thing they say is each other’s names. After all these years, it still makes them wheeze with laughter. Lady and Swampie are less of a mythological character than a playful reminder that it is always a good idea to play in the swamp, especially after dark.

SEQUOIA AND TAMOS are misunderstood. Because of where they live and where they come from, people tend to fill in the details and connect the dots. Filling in details and connecting dots is a tricky business. It makes assumptions about the space between the dots, when really all you have is dots. And let’s face it, the space between the dots takes up a whole lot more space than the dots.